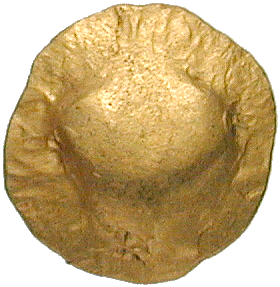 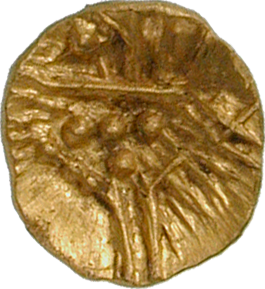 The smooth embossment on the obverse and the stripes and dots on the reverse of this coin are typical for the Celtic tribe of the Boii. In numismatics, these coin type is called 'Athena Alkis type.'

The archetype of thos coin was the gold stater of Alexander the Great with the image of Pallas Athena wearing a Corinthian helmet on the obverse. The reverse depicted Nike, the Greek goddess of victory.

However, these motifs can hardly be recognized on the Celtic imitation any more. The embossment on the obverse shows Athena wearing her helmet, although the goddess is reduced to a minimum, as is typical for Celtic taste. The same is true for the Nike on the reverse which is diminished to some stripes and dots.